Join Our Newsletter
Shop Our Store
MAIN MENUMAIN MENU
By Brian McLaughlin on July 8, 2019 in defensive gun use 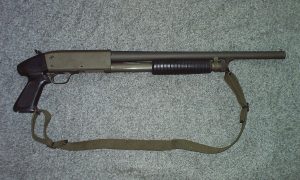 Fayetteville, North Carolina—A local man was arrested after he shot another man who invaded his home last Thursday night.

Mack Jones is being held at Cumberland County jail on $100,000 bail for charges of shooting into an occupied vehicle.

Jones’ Fiancé, Mika Lowe, told WRAL her family was eating dinner before plans of setting off fireworks in celebration of Independence Day, when a man they’d never seen before stormed into their home through the front door.

According to Lowe, the stranger who police have identified as 37-year-old Michael France, began demanding that the couple turn over his belongings.

“He came straight into the door, and the dog was barking,” Lowe said. “I don’t know what stuff he was talking about. We never seen this guy a day in our life. We pushed him out the door.”

While France moved from the home and towards his vehicle, the couple followed the intruder, but with Lowe in arms reach, France reached out and grasped her.

Officers say they view France to be the victim at the moment but say the investigation is ongoing and changes are possible including additional charges.

Jones’ family refute the charges and demand his release on account of his pristine criminal record.

Though, according to WRAL, law enforcement officials declined to comment on if France had a weapon stashed within his car or not.

On Friday, Jones appeared in court before Judge David Hasty wearing shackles to hear the charges filed against him.

Home defense is a tricky topic but understanding the basics can help tremendously. Learn how to better protect your home with the Complete Home Defense – Tactics For Defending Your Castle.

There are a few things that stand out in this home defense situation that might have changed the way things turned out.

What lessons stand out to you?

One Response to Man Arrested After Shooting Home Invader