Join Our Newsletter
Shop Our Store
MAIN MENUMAIN MENU
By Craig Martin on March 8, 2017 in Uncategorized 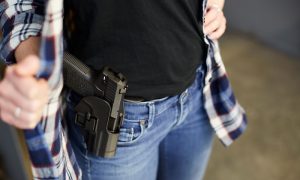 North Carolina Gun Rights, a pro-gun committee in the state recently announced a legislation proposal, that if passed as written, would remove the requirement for law-abiding gun owners to get concealed carry permits.

“I think people should really have some process they have to go through in order to get a gun and to carry a gun,” says Siri Espy, a Greenville resident.

“That sounds very dangerous to the public to me and also it really puts law enforcement in jeopardy also,” says James Satterthwaite, a licensed North Carolina concealed carry instructor.

“I believe that every law-abiding citizen deserves the right to carry their gun however they intend or want to, in whatever situation they’re in,” says Lindsey Richardson, with Colt’s Guns & Pawn. “However, I do feel like having proper education and training is very beneficial.”

State law currently requires people to get permission from the county sheriff for a concealed gun permit, as well as go through background checks.

Those in favor of removing the permit requirement say the process to get it is too lengthy. Meanwhile, others say it’s about safety.

“People need to know what they’re doing with the gun so they don’t end up shooting themselves or somebody else accidentally as well,” Espy says.